2021
A fisherman from Southern Philippines who has led a community in restoring their rich aquatic resources and their primary source of livelihood
Learn more about the awardee:

Being an archipelago in the heart of the Coral Triangle, the global center of marine diversity, it is not surprising that the Philippines is one of the top fish-producing countries in the world. Yet, the tragic irony is that fishermen—particularly municipal fishermen, who constitute 85% of over 1.6 million people employed in the fisheries sector—are among the poorest labor groups in the country. Traditionally unorganized, small-scale, with meager assets and access to outside assistance, they have suffered over past decades as their life-sustaining resource, the marine environment, is severely degraded.

One 53-year old fisherman has broken the mold by leading his community in preserving the coastal environment that has been the life-source for generations of fishing families. He is ROBERTO BALLON (fondly called “Ka Dodoy”). His Visayan parents migrated to the village of Concepcion in Kabasalan, Zamboanga Sibugay province in Mindanao, when he was in his teens. KA DODOY knew the realities of diminishing fish harvests in once rich fishing grounds; how his father, like other village fishermen, would spend long hours at sea and come home earning barely enough to buy rice for the family. Poverty prevented KA DODOY from going to college; so he knew he would have to “go back to the sea.” Having started his own family, he had to take command of the situation he was in.

In 1986, DODOY and thirty other fishermen started Kapunungan sa Gagmay'ng Mangingisda sa Concepcion (KGMC), or Association of Small Fisherfolk of Concepcion. Seeing how rampant fishpond conversion was, and how the abandonment of these fishponds when the business collapsed had destroyed the mangrove forests, KGMC decided to focus on mangrove reforestation. With little help and meager returns (since the benefits of reforestation are not felt quickly), the association saw its members dwindle to just three but KA DODOY, the association chairman, persisted.

Their perseverance attracted government support, reaching a milestone in early 2000, when the fishermen were granted tenurial rights to the reforested land under a government forestry co-management program. The fifty hectares they replanted by 1994 had expanded to five-hundred hectares of mangrove forests in 2015. What was once a desert of abandoned fishponds is now an expanse of healthy mangrove forests rich with marine and terrestrial life. Fish catch has improved dramatically from 1.5 kg per fishing trip of eight hours to as much as    7.0 kg in three-to-five hours of fishing. The improvement in the fisherfolk’s quality of life has been evident in their ability to buy a boat engine or simple household appliances and send their children to school.

From a handful members in the 1980s, KGMC now has a membership of 320 households. The group’s success led to other projects. In partnership with the municipal government, KGMC members were deputized to conduct the local Bantay Dagat or Sea Patrol volunteer program, aimed at protecting municipal waters from illegal fishing and mangrove logging. They have also attracted partnerships with development institutions in livelihood and social enterprise projects like oyster production, shell and crab culture, and seaweed farming. KGMC’s initiatives have been replicated in other towns in Zamboanga Sibugay and even beyond. These and other changes have given new life to Kabasalan, now regarded as the seafood capital of the province and an ecotourism destination.

The key mover in this transformation is DODOY BALLON. His exceptional dedication to serving others and self-sacrificing leadership that puts the group’s interest before his own have transformed his community. When KA DODOY and his fellow fishermen were starting out and it seemed like there was no one to help them but themselves, he said: “Our families depend on the sea for our survival, not on politicians or other people, so it is only right that we make its protection our priority.”

In electing ROBERTO BALLON to receive the 2021 Ramon Magsaysay Award, the board of trustees recognizes his inspiring determination in leading his fellow fisherfolk to revive a dying fishing industry by creating a sustainable marine environment for this generation and generations to come, and his shining example of how everyday acts of heroism can truly be extraordinary and transformative. 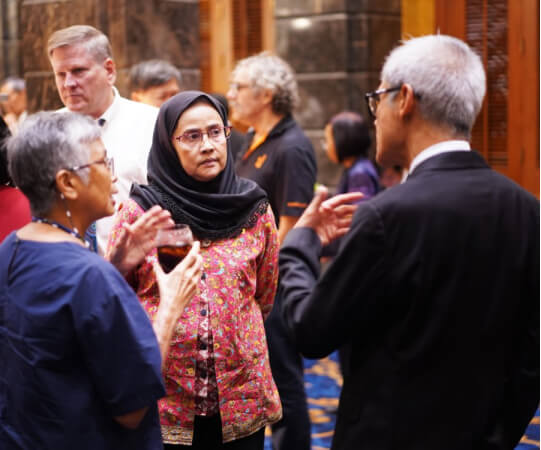 Roberto Ballon's fisherfolk group has long wanted to stop sourcing their fingerlings from the mangroves they planted because that disturbs the environment and ecological balance of the area.
DRAG
Follow us on: