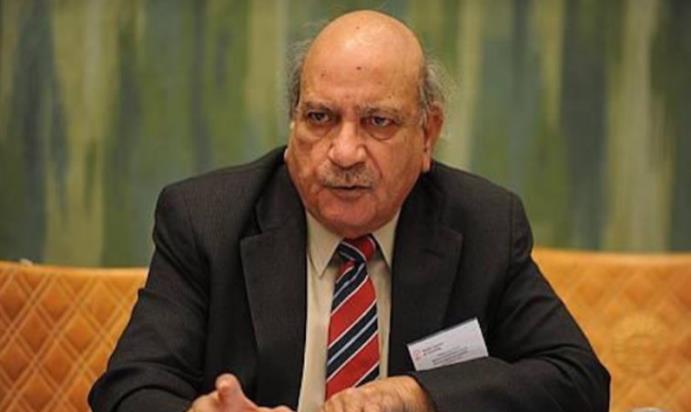 The Board of Trustees, Officers, and staff of the Ramon Magsaysay Award Foundation express deep sympathies to the bereaved family and relatives of Ibn Abdur Rehman, 2004 Ramon Magsaysay Awardee for Peace and International Understanding. I.A. Rehman passed on April 12, 2021 in Lahore after a brief illness, according to his family. He is survived by three sons and two daughters. His wife, Tauseef Rehman, had died in 2015. News spread quickly among human rights defenders, journalists and many who had known him, not only in Pakistan but all over South Asia. Tributes poured in for a man who had lived a life committed to others, who never wavered from fighting for human rights and speaking truth to power through journalism. “Every day I close my book, today’s over, next day will be another life,” he had said to his interviewer at the Ramon Magsaysay Awards ceremonies in Manila in 2004. “I sometimes tell my friends that I rise with the sun full of optimism, full of marvel, because every day, I live. You get weary and tired and frustrated, but I bury the pessimism in the evening. Tomorrow will be another day.” In his twilight years, he was writing for the Dawn, the oldest English-language paper in Pakistan. His last article may have been the one dated April 8, 2021, a few days before his demise. He wrote about the need to train and educate young politicians if they are to lead in democratic politics—a powerful message for crisis periods like today, when good leadership is sought desperately. “The root cause of political backwardness in societies such as Pakistan is a failure to move beyond the phase of agitation activity that had to be adopted out of necessity during the short 2 struggle for liberation from alien rule. Politically conscious societies having experience of stable democratic politics over a reasonable period provide for the training of young politicians at various forums including through normal educational courses. But countries such as Pakistan where the need for this kind of training is the greatest ignore this important prerequisite of democratic politics.” https://www.dawn.com/news/1617061/both-sides-unaware-of-their-role I.A. Rehman dedicated 65 years of his life in developing professional journalism in his country. Vehemently against oppressive dictatorial rule, he wrote against then President Ziaul Haq, martial law promulgator, in the weekly Viewpoint. He later served as editor of other papers and eventually became the editor-in-chief of the Pakistan Times. This was a government newspaper which he and his editor Aziz Siddiqui, “turned into a highly respected critical voice,” according to a colleague at the Human Rights Commission of Pakistan. His columns, “Between the Lines,” have been published in a collection called Pakistan under Siege. Work with the Human Rights Commission of Pakistan In 1990, he joined the Human Rights Commission of Pakistan (HRCP) as director upon the invitation of its chair, Asma Jahangir, 1995 Ramon Magsaysay Awardee for Public Service. His work in the HRCP secretariat pushed forward the critically important formulation of charters of rights and reporting on the state of human rights in the country. Rehman also guided Asma Jahangir as she challenged power wielders.

Later, he became the Secretary General of HRCP. According to the HRCP, his work showed his “advocacy against enforced disappearances, the death penalty and bonded labor, or his unwavering support for the rights of women, children, and religious and ethnic minorities.”

Former HRCP chair Zohra Yusuk wrote that even as Rehman was “an intellectual of a high caliber, he was nevertheless, totally at home sitting amongst the families of bonded labor in Hyderabad or joining a sit-in protesting enforced disappearances in Quetta. His presence gave courage to many in the human rights movement who saw in him a constant ally, rather than as the head of one particular rights organization.” Leading the Pakistan-India Peoples’ Forum for Peace and Democracy (PIPFPD) In 2004, I.A. Rehman and Admiral Laxminarayan Ramdas of India received the Ramon Magsaysay Award for Peace and International Understanding. The board of trustees “recognized their reaching across a hostile border to nurture a citizen-based consensus for peace between Pakistan and India.”

As Ramdas learned of Rehman’s passing, he shared these thoughts with an interviewer. Here are a few excerpts: When the announcement of the Magsaysay peace awards was made in August 2004 – while on the one hand I was totally surprised – I was also totally delighted that the Foundation had made such a wise choice – of selecting a Pakistani and an Indian to be recognised for their joint work on trying to build peace in our region. There is a strong message there which we must always remember. And over the years there have been other experiences which have only strengthened my inner conviction that we must strive to create a society where we promote justice, love and hope – this alone can lead to peace. And all talk of development is meaningless unless economic and social justice and harmony are first put in place. There are many unanswered questions too! Why and how were we selected – Rehman - a Human Rights Activist and journalist from Pakistan…Ramdas a military veteran – who had fought three wars and won a gallantry award and that too against Pakistan! Let us not forget that we military men are usually kept at arm's length by the Peace and Human Rights Constituencies!

I wish I had actually asked Rehman Saab what his reaction was when he first met/encountered me – an unlikely fellow traveller! Alas I never did. Instead – we have shared many a noggin and swapped stories – and wondered how we could best take forward our quest for a different world… Rehman Saheb was eternally full of hope and he continued to display that amazing belief in the ultimate success of all our efforts and that we the people had the power to bring change. At the same time he was also a realist as one who had fought many battles throughout his life. We often used to smile wryly and say that we may not see peace in our lifetime – but we needed to stay the course for the sake of future generations. His regular column in the DAWN newspaper was something most Pakistani civil society and movement people would wait for and read with avid interest. And above all, Rehman Sahib was always available to speak at a variety of forums - including one memorable evening at our home in SainikPuri, Secunderabad. This was his way of reaching out to a wide circle of people - and it was effective too, because of his gentle laid back style which he could also use with finesse and power to drive home a point. I think that people like I A Rehman actually achieved something remarkable - they demonstrated that as journalists and public intellectuals they could raise the bar so high that others would have no option but to achieve ‘much more with much less’. (Please access the full article here, https://www.thecitizen.in/index.php/en/NewsDetail/index/6/20214/Goodbye---From-an-Indian-Military-Veteran-to-a-Pakistani-Human-Rights-Activist)

How I.A. Rehman will be remembered

I.A. Rehman will be remembered as a man who “never lost hope. Irrespective of how bad things were, he was an eternal optimist and always believed things would work out. He never let anger towards anyone or anything fester.” – Dr. Mehdi Hasan, veteran journalist and media historian. “I.A. Rehman leaves behind a strong legacy of speaking truth to power in a way that not only persuaded others of the value of respecting human rights, democracy and the rule of law, but also conveyed to those he criticised how damaging their role could be for the most vulnerable 5 members of society.” - Hina Jilani, HRCP chairperson He lived a simple and contented life and avoided limelight and self-projection. He was a dervish who lived and worked for the people and left behind a tremendous legacy of resistance. …he has left behind a glorious tradition of critical thinking and selflessly working for the common man. – Imtiaz Alam, Secretary General, South Asian Free Media Association.

I.A. Rehman views his exhibit at the 2004 Ramon Magsaysay Awards festival in Manila “ While facing these challenges, we [at the Pakistan-India Peoples’ Forum for Peace and Democracy] are sustained by the support of a very large number of ordinary women and men in both countries who do not correspond to the images of Indian and Pakistani people the world media carries every day. These people who constitute a majority in South Asia are neither bloodthirsty fundamentalists nor intolerant zealots out to convert the world. They live by their labour and are striving to realize their dreams of a better life for their children. I am happy that the honour done to my dear friend Admiral Ramdas in India and myself will enable the world to recognize these peaceful millions and also encourage them to pursue the goal of peace and their fulfillment. I thank you again for the honour. ”- Ibn Abdur Rehman, giving his Awardee response in Manila