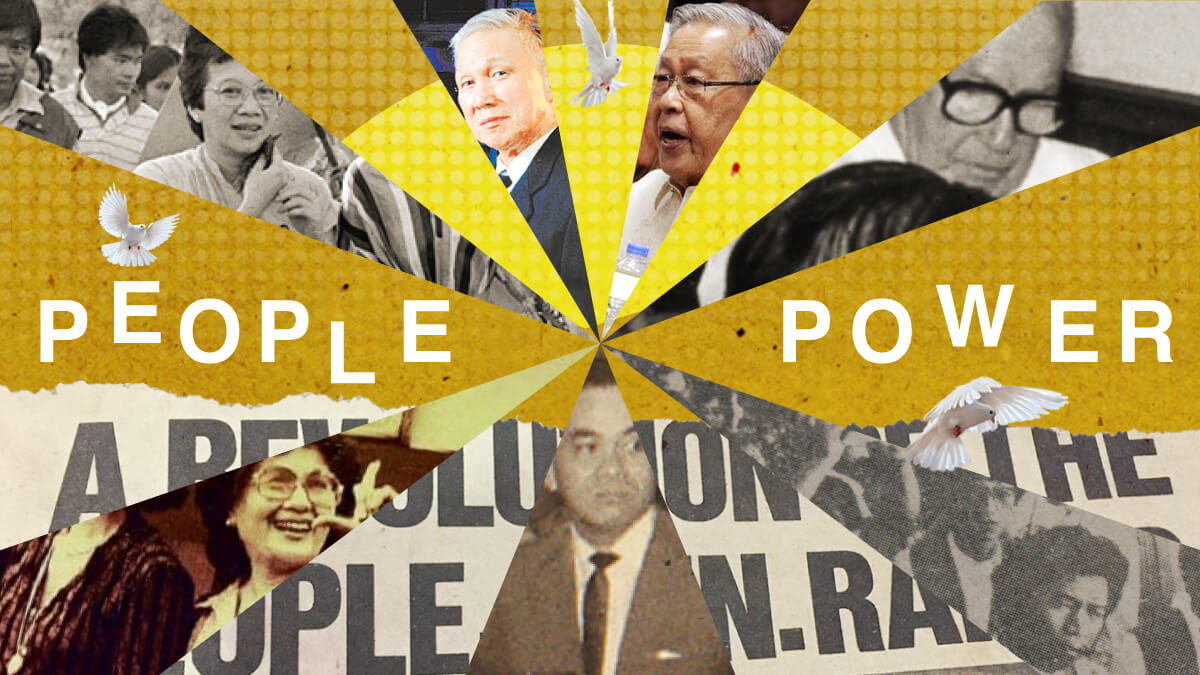 According to the Official Gazette of the Philippines, Filipinos have been taking their grievances to the streets for more than a century, and in February 1986, a monumental event proved to be significant in Philippine and world history.

For four days, millions of Filipinos gathered along Epifanio delos Santos Avenue (EDSA), a major thoroughfare in Manila, to peacefully protest against the two-decade dictatorship of Pres. Ferdinand Marcos.

Ordinary citizens gathered at EDSA together with several civil society organizations, and political, military, and religious groups in an unprecedented non-violent mass gathering. Armored tanks and armed soldiers were met by nuns and priests holding rosaries and flowers.

The revolution culminated with Ferdinand Marcos and his family leaving the Malacañang Palace to live in exile in Hawaii, ending the 21-year Marcos dictatorship and restoring democracy in the Philippines.

This peaceful revolution, which is now globally renowned as The People Power Revolution, surprised the world and the Filipinos as well. They never thought that a dictator would be overthrown, not by sheer force, but by unity in peaceful means.

Some Ramon Magsaysay Awardees working in the Philippines were among the millions who contributed to the restoration of Philippine democracy.

RADIO VERITAS in the Philippines is a short-wave Catholic radio station that played a key role in mobilizing the citizens during the 1986 People Power Revolution.

RADIO VERITAS made its mark during its coverage of the assassination of opposition leader and former Senator Benigno "Ninoy" Aquino Jr. when he landed at the Manila International Airport on August 21, 1983. The station had an immediate and extensive reporting on the assassination. 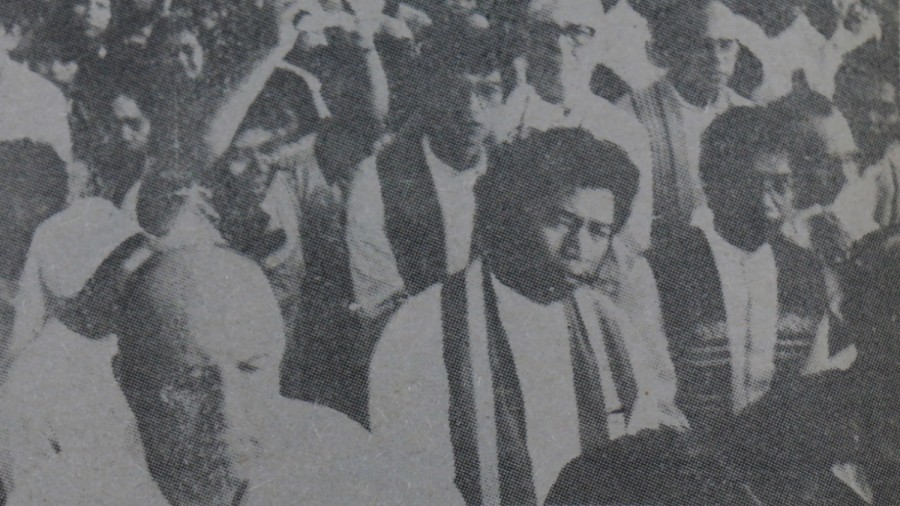 Photo by: CMRF-Phil.org via Radio Veritas

Despite the Marcos dictatorship’s displeasure towards the station’s uncensored factual reporting, RADIO VERITAS continued to provide its audience information unavailable elsewhere about anti-government rallies, demonstrations and boycotts. It was through RADIO VERITAS that the Catholic leaders in the Philippines used the power of the airwaves as a call to action by the Filipinos in toppling a dictatorship.

RADIO VERITAS received the Ramon Magsaysay Award, Asia’s premier prize and highest honor, in 1986 for “its crucial role in using truth to depose an oppressive and corrupt regime and restore Filipino faith in the electoral process.” 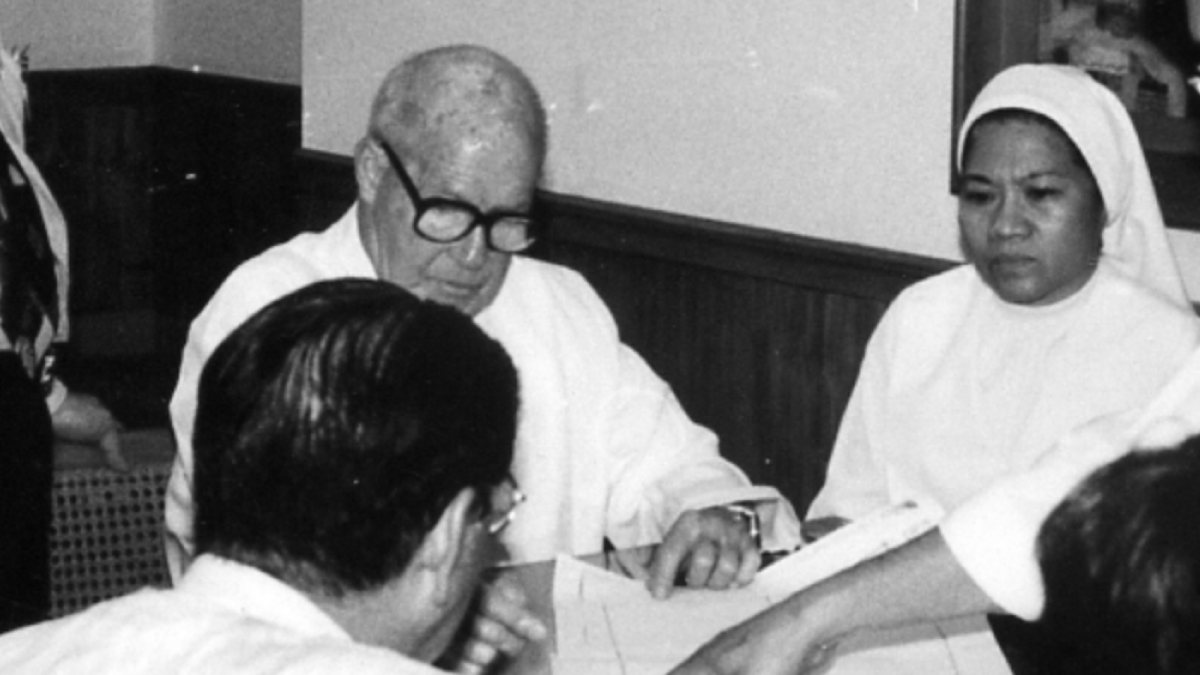 When he was not busy with his religious duties, Philippine-based American priest JAMES REUTER JR., S.J. did not shy away from making his voice heard through the use of media.

During the Marcos dictatorship, Fr. REUTER is emphatic in saying that, first and foremost, "Martial Law was declared against mass media." Marcos's first letter of instruction directed his press and defense secretaries to "take over and control all communications media for the duration of the present national emergency."

He was among the many journalists and media owners alike who were arrested and jailed, some of them for several years.

In 1989, FR. JAMES BERTRAM REUTER JR., S.J., received the Ramon Magsaysay Award for “his employing his gifts as writer, theatrical director, and broadcaster, but most of all as teacher, to make the performing arts and mass media a vital force for good in the Philippines.”

A brave widow in yellow, CORAZON AQUINO is a prominent figure during the 1986 People Power Revolution.

AQUINO, by experience, was not a leader at all. She was a simple housewife who supported her husband, opposition leader Benigno "Ninoy" Aquino Jr., during his political stint before he was assassinated upon his return to the Philippines in 1983. 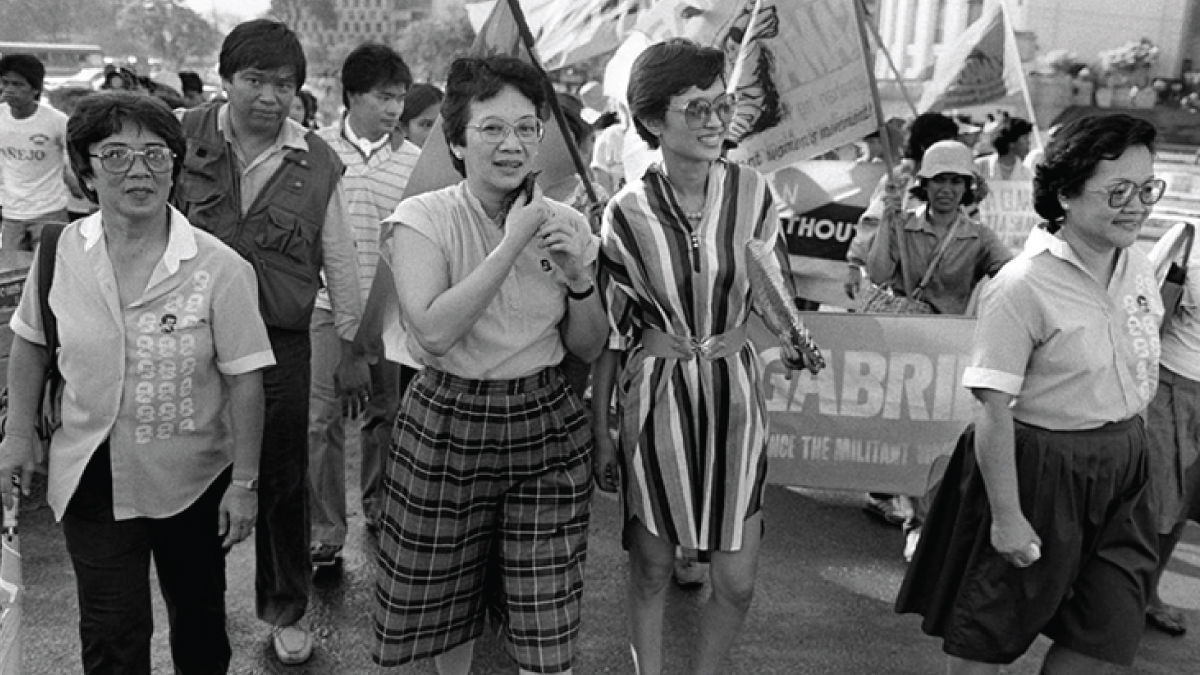 Photo by: The Guidon

In Manila, AQUINO had not expected to see so many mourners: millions of Filipinos came to the funeral cortège — to protest the repression, grinding poverty, and corruption of the Marcos regime, and many to honor the man, Ninoy, who declared when he was being dissuaded from returning home: "The Filipino is worth dying for."

AQUINO worried about the outbreak of violence, a concern that would always be foremost in her mind.

As a symbol of the opposition against Pres. Marcos, AQUINO reluctantly agreed to run for president in a snap election — bringing to the struggle not only her stature as widow of the dictator’s most famous victim but also her integrity and her Christian faith and hope.

This gave the movement a powerful moral center that galvanized the dictator’s opponents and shamed his supporters. Along EDSA, People Power Revolution won the day. And CORY AQUINO became Philippine president and a symbol of nonviolent democratic aspiration the world over.

CORAZON COJUANGCO AQUINO was conferred the 1998 Ramon Magsaysay Award for “her giving radiant moral force to the nonviolent movement for democracy in the Philippines and in the world.” 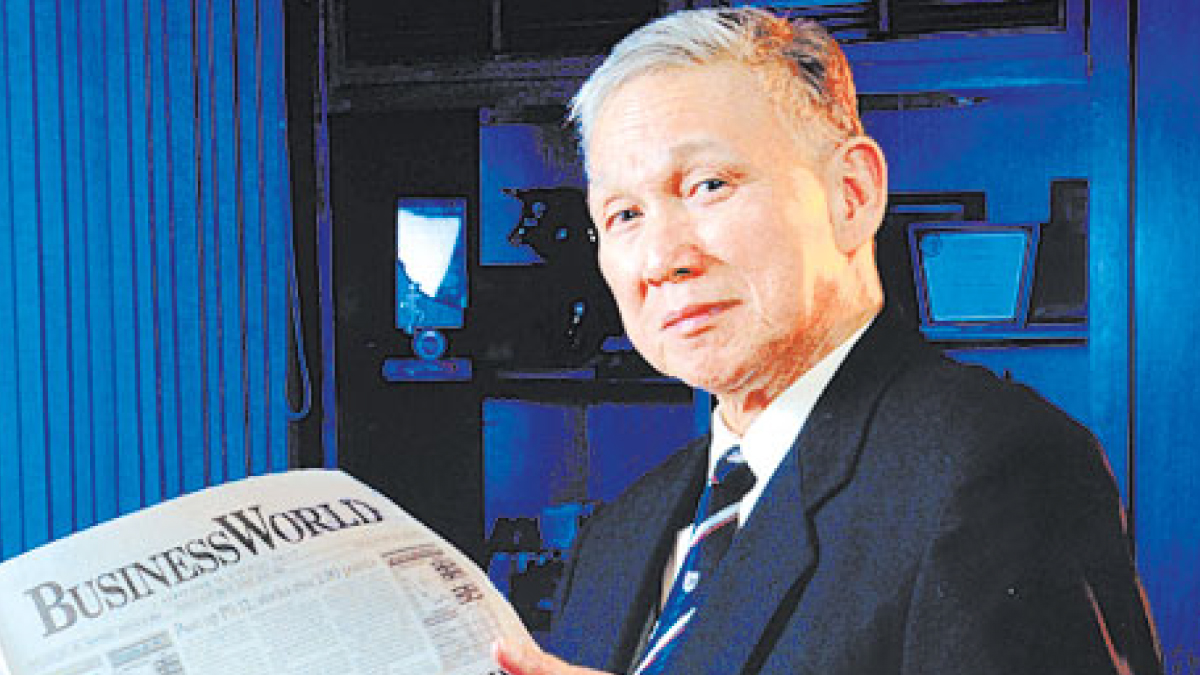 Photo by: The Business World

The free press of the Philippines is a national glory. Yet it is often troubled. The dictator Marcos suppressed it for years. And, every day, a variety of insidious pressures undermines its integrity. In his career, RAUL LOCSIN has withstood these pressures.

He founded Business Day, Southeast Asia’s first daily newspaper devoted to business, in 1967. And under the Marcos dictatorship, Business Day survived as the capital’s sole independent newspaper. In a climate of disinformation, it became the gold standard for accuracy.

The turning point for LOCSIN and his paper was the assassination of Benigno Aquino Jr. where a wave of revulsion and protest swept the country. The economy went into a spin, and it was hard to separate economic news from political news since the country’s business executives, the paper's core constituency, had been galvanized into action and Business Day became their voice.

Their first act: come out with a bold editorial condemning the Aquino assassination. The newspaper released factual stories to local and foreign readers. It expanded its coverage of political news and became a forum for independent, critical reporting. Readers turned to it as "the only credible paper."

LOCSIN's paper conformed to the highest standards of journalism by keeping the flow of information and ideas open at a time when journalism was tested by state repression, social confusion, and inflamed political passions.

RAUL L. LOCSIN received Asia’s premier prize and highest honor in 1999 for “his enlightened commitment to the principle that, above all, a newspaper is a public trust.”

The Philippines' champion of transparency and integrity, former Philippine Supreme Court Chief Justice HILARIO DAVIDE JR. enhanced the authority of the Court as the country's ultimate arbiter of justice. 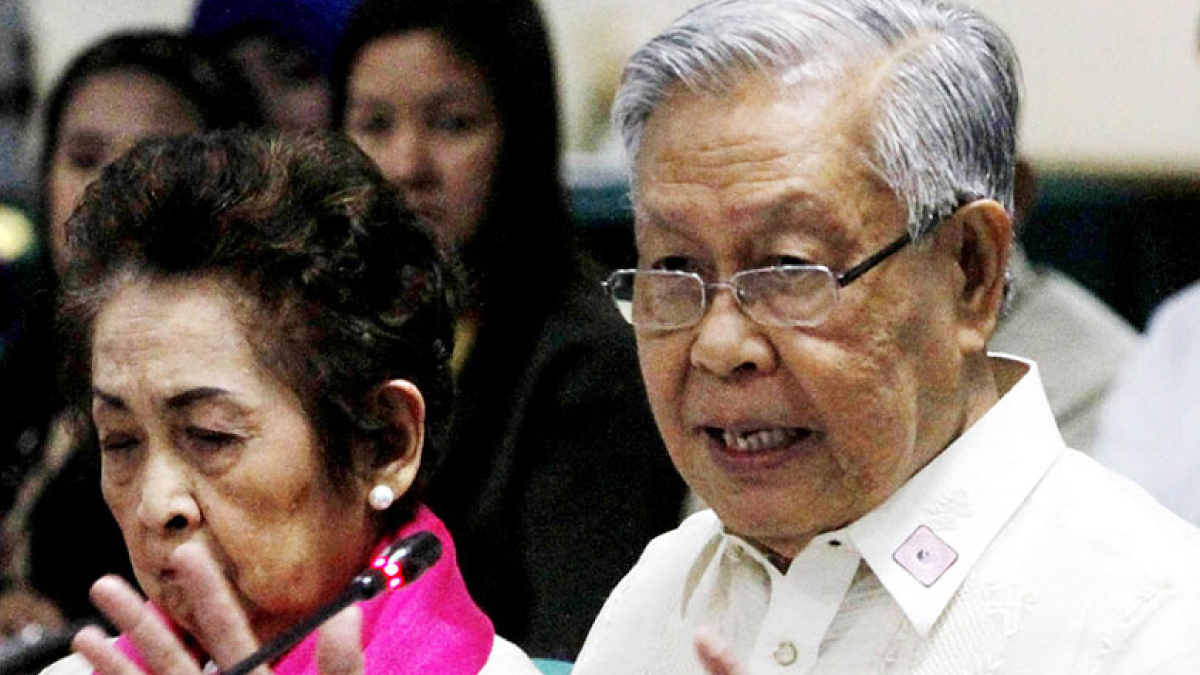 An advocate for the youth and their role in nation building, DAVIDE returned to politics in 1970 to campaign as one of the delegates for the Constitutional Convention (Concon) — the process of deliberating on amending or revising the 1935 Constitution of the Philippines — and eventually winning a seat in 1971.

Shocked by Martial Law, he mobilized fellow Visayans to challenge the dictatorship. In 1978, his opposition party gained a small foothold in the Marcos-dominated Interim Batasang Pambansa (National Legislature), where Assemblyman DAVIDE called for an end to martial law and sponsored bills opposing corruption and promoting electoral reforms.

After the 1986 People Power Revolution, then-President Cory Aquino named HILARIO DAVIDE to one of the fifty seats for the Constitutional Commission (ConCom) to replace the 1973 Constitution of the Philippines. Given a second chance to craft his country’s charter, DAVIDE set to work with a will.

He sensed a historic opportunity to make real changes in the aftermath of the bloodless 1986 People Power Revolution. “The timing was perfect, the climate was perfect, the environment was also conducive to the formulation of a very good constitution.”

Asia's premier prize and highest honor was conferred to HILARIO G. DAVIDE, JR. in 2002 for “his life of principled citizenship in profound service to democracy and the rule of law in the Philippines.”

She is an unlikely crusader in dark times. Of a genteel family background, educated in conservative Catholic schools, petite, cheerful and fun-loving, she seems miscast for the role of fearless fighter for political causes.

EUGENIA APOSTOL belies stereotypes. She has played an important role in Philippine political history as an independent-minded and innovative publisher who helped remove from office two disgraced presidents.

During the Marcos dictatorship, when many independent newspapers closed down at the onset of Martial Law, APOSTOL found a niche with Women's Home Companion and later launched a new magazine with the hip name of Mr. & Ms. And in 1981, Mr. & Ms. took an unexpected turn after Marcos announced a new policy of tolerance in the guise of “lifting” Martial Law while keeping his coercive powers in place.

Testing the new policy, APOSTOL joined a few brave others in the "mosquito press" and began publishing articles openly critical of the dictatorship. 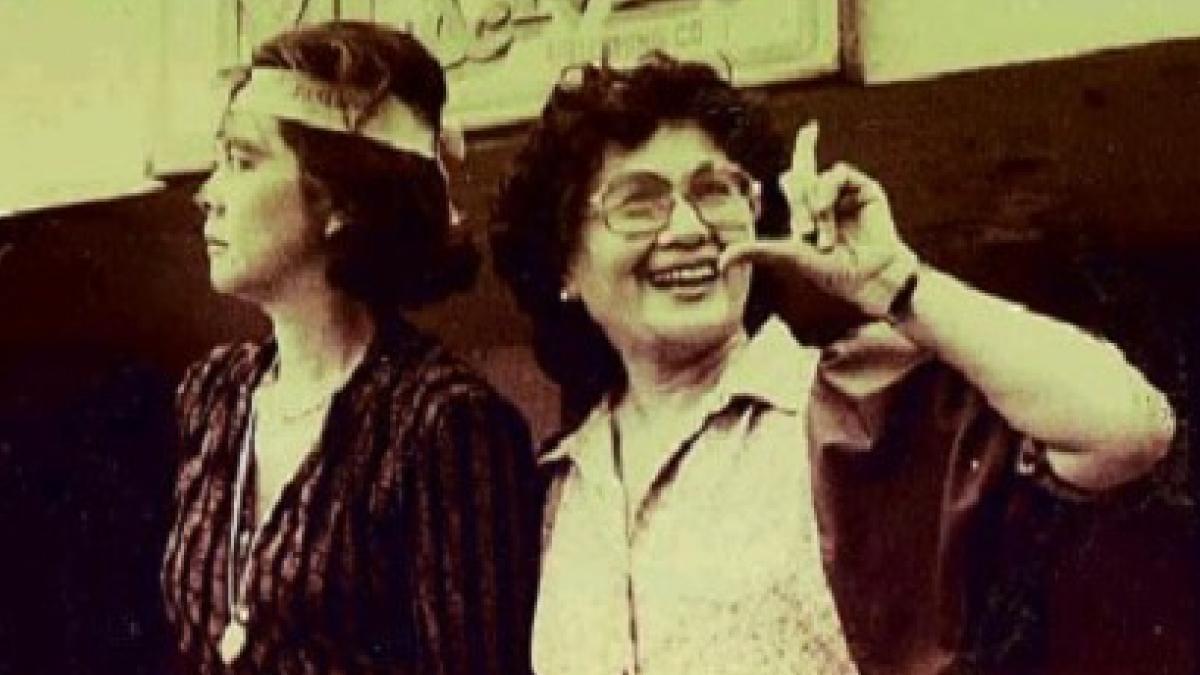 As the political crisis deepened in late 1985, APOSTOL rose to meet the need for an independent Philippine newspaper. Under her leadership, the Philippine Daily Inquirer (PDI) reported fearlessly on Corazon Aquino's popular drive for the presidency and its jubilant people-power climax, the People Power Revolution.

EUGENIA DURAN APOSTOL received the 2006 Ramon Magsaysay Award for “her courageous example in placing the truth-telling press at the center of the struggle for democratic rights and better government in the Philippines.” 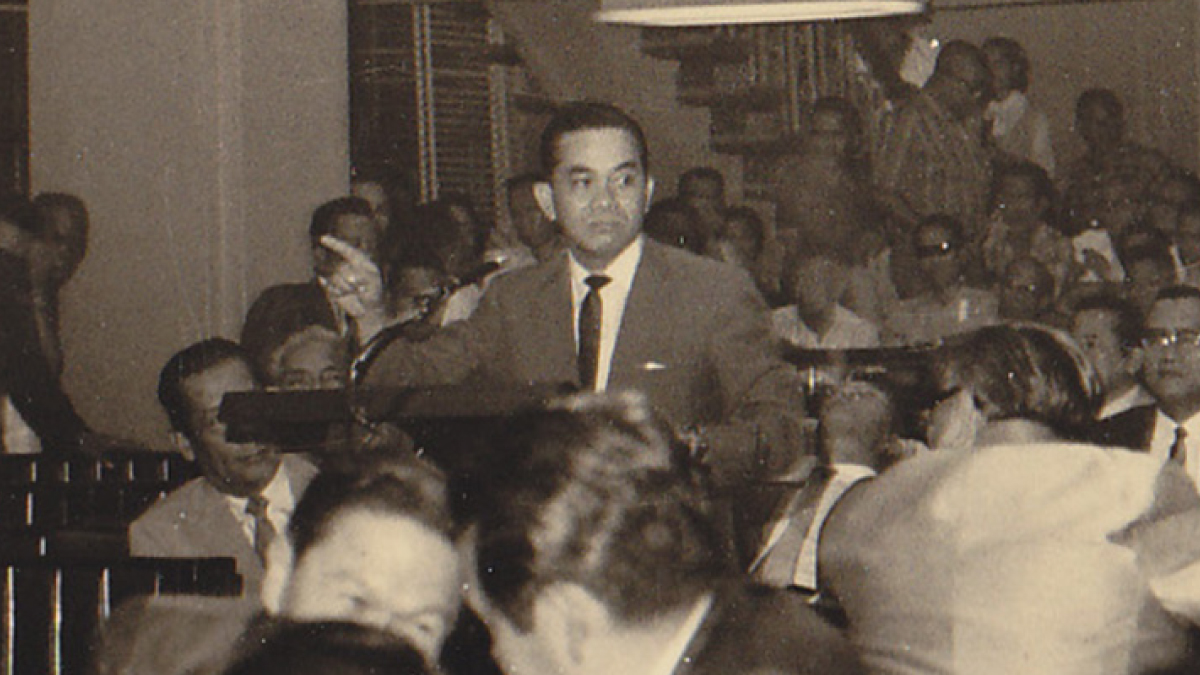 JOVITO SALONGA, a former member of the Philippine Senate, has only one good eye and one good ear. Despite these seeming limitations, he remained a conscientious advocate for transparency and good governance in the Philippines.

He opposed Martial Law from the start, defending opponents of the Marcos dictatorship and working tirelessly for the succor and release of political prisoners and for the democratic opposition.

On February 23, JOVITO and his wife joined the huge throng of people, massed to protect the mutineers against Marcos’ loyalist forces, during the People Power Revolution.

The dictatorship finally fell on February 24, 1986, as the Marcos family fled into exile, and a few days after, President Corazon Aquino appointed JOVITO as the first chairman of the Presidential Commission on Good Government (PCGG), which was tasked with recovering the ill-gotten wealth plundered by the Marcos family and their cronies.

Under his watch, PCGG was able to recover funds and properties kept by the Marcos family in the United States, and in Switzerland.

JOVITO SALONGA received the Ramon Magsaysay Award in 2007 for “the exemplary integrity and substance of his long public career in service to democracy and good government in the Philippines.”