2012
A charismatic and intense Bangladeshi lawyer and advocate for environment who has committed her life to seeing to it that under her leadership, the Bangladesh Environmental Lawyers Association (BELA)’s expanded programs would spark wide awareness that the “right to environment” is part of the constitutional “right to life"
Learn more about the awardee:

Few cases of social inequity are as stark and dramatic as these. In Bangladesh, around 150 decommissioned ships—mostly from rich nations—arrive every year, to be beached and dismantled as scrap. These ships poison coastal waters with toxic chemicals, and expose 20,000 ship-breaking workers – many of them child laborers—to extremely dangerous working conditions. Also, in Bangladesh, irresponsible but powerful private developers are converting critical wetlands into commercial real estate through landfills, in utter disregard of the law. In doing so, they displace settlers, damage a fragile ecosystem, and worsen the country’s vulnerability to catastrophic floods.

Lawyer SYEADA RIZWANA HASAN has committed her life to seeing to it that all this must stop. Born in Dhaka to a family with a tradition of public service, HASAN earned a master’s degree in law and immediately went to work for the Bangladesh Environmental Lawyers Association (BELA), a pioneer in public interest litigation founded by the highly-respected lawyer-activist Mohiuddin Farooque. When Farooque died in 1997, HASAN assumed leadership as BELA’s executive director. Since then, BELA’s legal activism has widened. It has taken on close to a hundred cases involving industrial pollution, sand extraction from rivers, forest rights, river pollution and encroachment, hill cutting, illegal fisheries, waste dumping, and others.

Two precedent-setting cases raised BELA’s visibility and generated wide public support for the cause of environmental justice. Since 2003, HASAN and BELA have fought a battle in the courts to prevent toxin-laden ships from entering Bangladesh unless they have been decontaminated at their origin, and to enforce standards for the protection of workers and the environment. Even as this battle is not over, HASAN has scored significant successes. Compensatory fines were ordered—the first time in Bangladesh’s judicial history that a polluter was fined. Then, in 2009, the Supreme Court directed the closure of all thirty-six ship-breaking yards in Bangladesh that have been operating without environmental clearance, and directed the “pre-cleaning,” at origin or before entering Bangladesh, of all ships to be imported for breaking.

In 2000, BELA mounted a successful campaign for a law that would ban the filling up of wetlands, but the law was never enforced. In 2004, HASAN put the law to a test by filing a case against a large and powerful land development company, for filling land for a new township in the middle of a flood-flow zone. HASAN and her small team had to face twenty senior, high-profile lawyers, navigate court corruption, and endure protracted delays. Eventually, they won, when the court ruled the housing project to be illegal. However, the judgment was undermined by the fact that the developer had already sold lots in the meantime. Undaunted, even as appeals and counter-appeals have been filed, HASAN asserts: “Standing against all these forces is in itself a victory.” She and BELA have sent a clear message that it is not going to be business-as-usual, and that despoilers of the environment are going to be challenged.

Under HASAN, BELA expanded its programs and sparked wide awareness that the “right to environment” is part of the constitutional “right to life.” A charismatic and intense advocate, she is unswayed by the threats and intimidation that have come her way. She remains focused and passionate. Fighting those who violate environmental laws with impunity, she explains: “My job is to revive hope in the judicial system among Bangladeshis, to give the message to the people that the law and lawyers do not always exist for the mightiest.”

In electing SYEDA RIZWANA HASAN to receive the 2012 Ramon Magsaysay Award, the board of trustees recognizes her uncompromising courage and impassioned leadership in a campaign of judicial activism in Bangladesh that affirms the people’s right to a good environment as nothing less than their right to dignity and life.

Let me first of all express my heartfelt gratitude to the Ramon Magsaysay Award Foundation for giving me this honor and for recognizing my work for environmental justice. This indeed, is recognition of, and a definite encouragement for all movements around the world for the protection of the mother earth.

My journey as an environmental lawyer started back in 1993 when I joined Bangladesh Environmental Lawyers Association, BELA which imbibed the visionary and dynamic leadership of its founder Dr. Mohiuddin Farooque. The BELA leadership inspired young lawyers like me to work for the cause of environment and explore innovative ways of using law to defend rights and denounce injustices. Since then, our journey for environmental justice has been a relentless one. We, at BELA, are proud to be associated with a cause that deeply affects the life of every Bangladeshi and indeed every human being around the globe.

We began our first fight against the plundering of our natural resources by those privileged corporations and bodies who enjoyed a long culture of impunity. Our effort was aimed at halting such trends of plundering by subjecting the wrongdoers to due process of law. We had to rebut erroneous economic arguments and challenged mindsets that made our job eventful, challenging, adventurous and thrilling. We believed the law was for all and had to ensure for all equally.

We are fighting for the rights of our farmers, our fisherfolk and our forest-dwellers. We stand for the protection of the trees, the hills, the lakes and the rivers to whom we are all indebted for our wellbeing. We continue to question the faulty, short-sighted and exploitative path of development that destroys the natural resource base. Our fight is against deprivation, maladministration and abuse of power.

Due to the mighty vested powers involved in the game, the process of change has been cumbersome and lengthy. We live with hope and on the face of adversities, gather strength from the force of truth and truth only.

Nineteen years down the road, we may not claim to have righted all the wrongs, we are unable to paint a rosy picture, but we can boldly and strongly assert that hardly any environmental wrong or any attempt to interfere with people’s environmental rights in my motherland goes unattended or unchallenged.

Although we may seem unconventional in what is considered traditional legal practice, this recognition by the Magsaysay Award Foundation today testifies that we are on the right track and reasserts the validity of our movement for environmental justice. This Award, I firmly believe will help strengthen the process greatly.

With my full commitment to continue more rigorously in pursuing the cause of environmental justice particularly for the poor, let me conclude by echoing the famous words of Martin Luther King Jr.

“No, we are not satisfied, and we will not be satisfied until justice pours down like water, and righteousness like a mighty stream.” 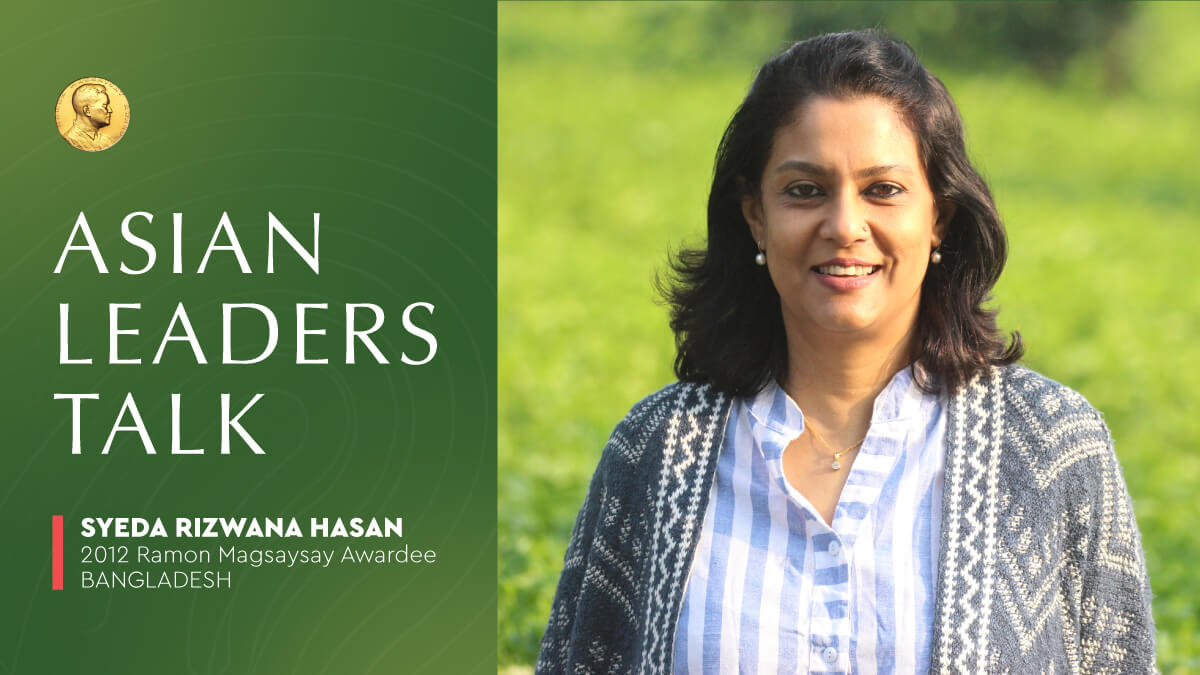